A visit to Gaggan in Bangkok – anything but ordinary

More than just curry, more than just molecular kitchen, anything just not ordinary
Anand Gaggan’s restaurant ‘Gaggan’ located in Bangkok is anything but ordinary. If you like molecular kitchen at its best, combined with the Indian touch of curry and a very entertaining chef, you will love this place. The prices for a dinner at the best Asian restaurant in the world are high but justified. 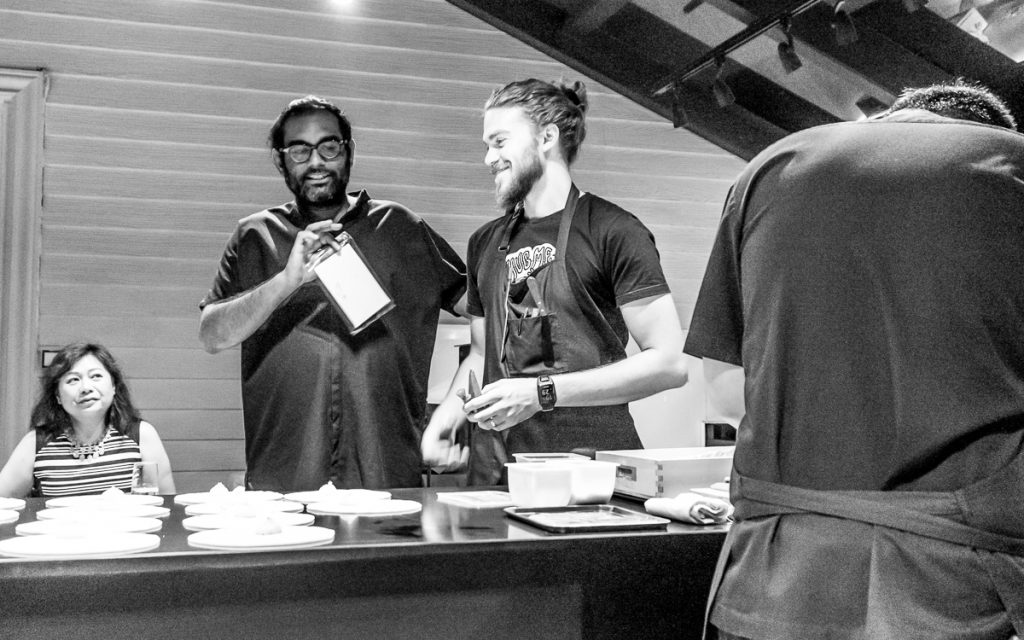 Cooking shows on television have a long history and are more popular than ever. But if there is one show – well actually it’s more a documentary than a cooking show – which has to be highlighted than it is ‘Chef’s Table’ on Netflix. Here you get to know the most famous, creative and awarded chefs in the world and you learn about their careers and sometimes even their secrets of being a successful chef. As a huge fan of Asia and Asian food, one particular episode has turned out to be one of my personal highlights: The report about the restaurant Gaggan in Bangkok, Thailand. An Indian chef with a fable for curries is certainly not very special. But when you bring your gustatory roots to the maybe most crazy city in the world (and I mean this in a very positive manner) and include those to the molecular cooking then it certainly becomes interesting. If you are also able to walk the ‘fusion path’ in a very creative manner then you become extraordinary. This is how I would describe Anand Gaggan and his restaurant in the center of Bangkok. 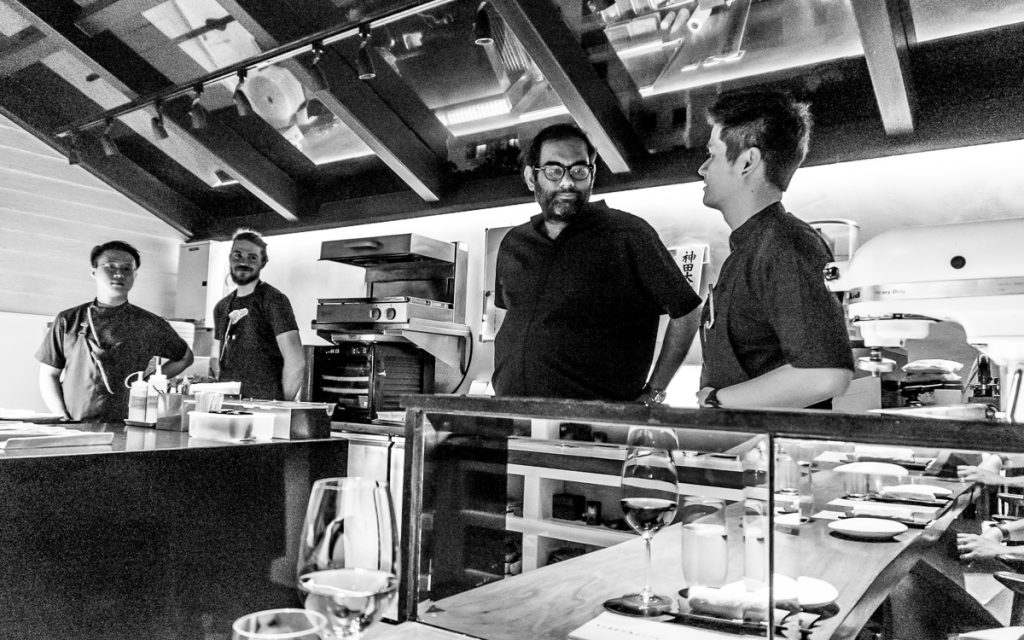 If you ask the 38 year old Indian-born chef Anand about his profession it is likely that he will answer ‘musician’ with a certain smile in his face. And most likely if he had not become one of the most recognized chefs in the world he might be a drummer in (hard) rock band instead. Even today music plays an important role in his life and if you ever have (had) the opportunity to sit at his Chef’s table in his restaurant then you most likely will also listen to some of his favorite songs.

Anand started his early career in India, after receiving a diploma from a catering college, as a trainee with the Taj Group. He left the Taj Group in order to start a new career in Bangkok. Here he started working at ‘Red’, a restaurant that specializes in contemporary Indian cuisine [wikipedia.org]. Anand was also heavily influenced by Spain’s most famous restaurant elBulli where he completed an internship with the worlds most recognized chef Ferran Adrià. According to Anand, he called elBulli 18 times asking for an internship. Finally his persistence paid off and built the basis for his later career. “My religion is elBulli. My pope is Ferran Adrià, and he wanted me to exploit the technique of elBulli and molecular gastronomy and exploit what my cuisine has to offer.” [fcsi.org]

Besides the influence Ferran Adrià had on him, Anand also considers his mother to be an important trailblazer for his career and mentioned once: “My mother is the biggest inspiration of my life,” [Source: edition.cnn.com]

Gaggan himself is a big fan of Japan (and of course of the most famous Sushi Master Jiro Ono) and has visited the country more than 200 times. Due to his fable for the culture and cuisine it is possible that his next station in life will be the country of the rising sun. 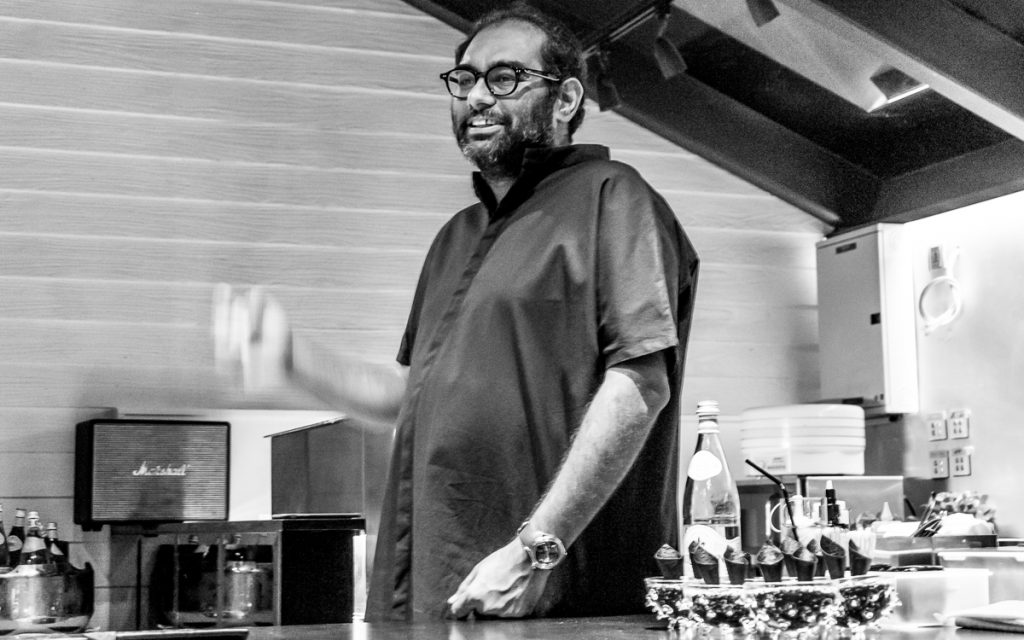 Music, food and family…key ingredients for a good life?

Located at the Chef’s table, purely luck or fate?

We asked for a reservation at the Gaggan in April this year already knowing then that we would like to have a very extraordinary dinner somewhere during our vacation to Asia. We were happy to receive a confirmation email a few days later for our preferred date, Sunday, October 1st. You can imagine our excitement and that our expectations have been high. Our reservation was for 6:00pm, but we arrived a bit early which gave us the opportunity to explore the area a bit before the restaurant officially opened. The restaurant is located in a white colonial building in a side street of Lumpini in a backyard. For Bangkok circumstances you could even call this backyard quaint.

As more and more people arrived, you could see the excitement in their faces as well as their expectations for this evening. We were welcomed into the restaurant and seated in a bar / lounge area. Basically the restaurant is brightly and simply furnished, giving it a comfy sort of feeling. After maybe 10 additional minutes we were informed that we would be sitting at the Chef’s table – at this point of time not really knowing what this exactly meant. The Chef’s table was built in a u-shaped, open kitchen form and 13 people from all over the world were seated at the table. After a while a couple of young chefs began with the preparations for the 25 (!!!) course dinner menu, called the ‘Gaggan Experience’. Actually we had no idea what to expect because the only description of the menu was a list of 25 emoji’s – giving us a first hint of the creativity of this restaurant. I decided to go for the accompanying wine pairing and had a great sommelier. After a while we discovered that we both have a fable for Sake – easy to understand since the Sommelier was originally from Japan. It turned out that instead of only getting one kind of Sake, I got a second kind too (instead of one of the wines) – lucky me. In total 6 different wines/sakes have been served and all have been very special and unique. 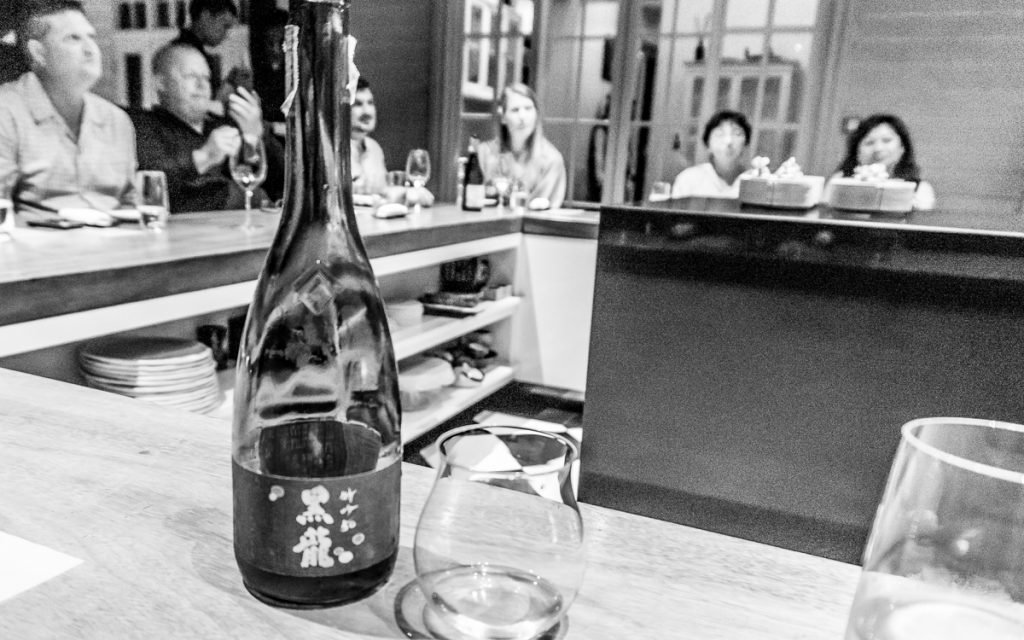 ‘Just for me’: Ginjo Sake pairing

In the spotlight, Gaggan himself

After all preparations were finished and the menu was about to start (about 7:00pm / 19:00), an Indian-looking guy showed up. Now we finally understood the meaning of the term ‘Chef’s table’ because it was Anand Gaggan himself, the ‘inventor’ of Progressive Indian Cuisine. He ended up spending about 3 hours entertaining us and leading us through his Indian-influenced molecular fusion cuisine. In other words, luckily the Munich party was chosen to experience the hilarious but nevertheless profound nature of one the world’s best chefs who actually wanted to be a rock star. If you would ask him about the three most important things in his life he maybe would answer ‘food’, ‘family’ and ‘Rock’n Roll’ whereas the order is not binding. Interestingly we also learned something about sex, Kamasutra and aphrodisiac and the relationship to his food. If I would’ve not known better, I would have said this was not just an ordinary restaurant visit :) 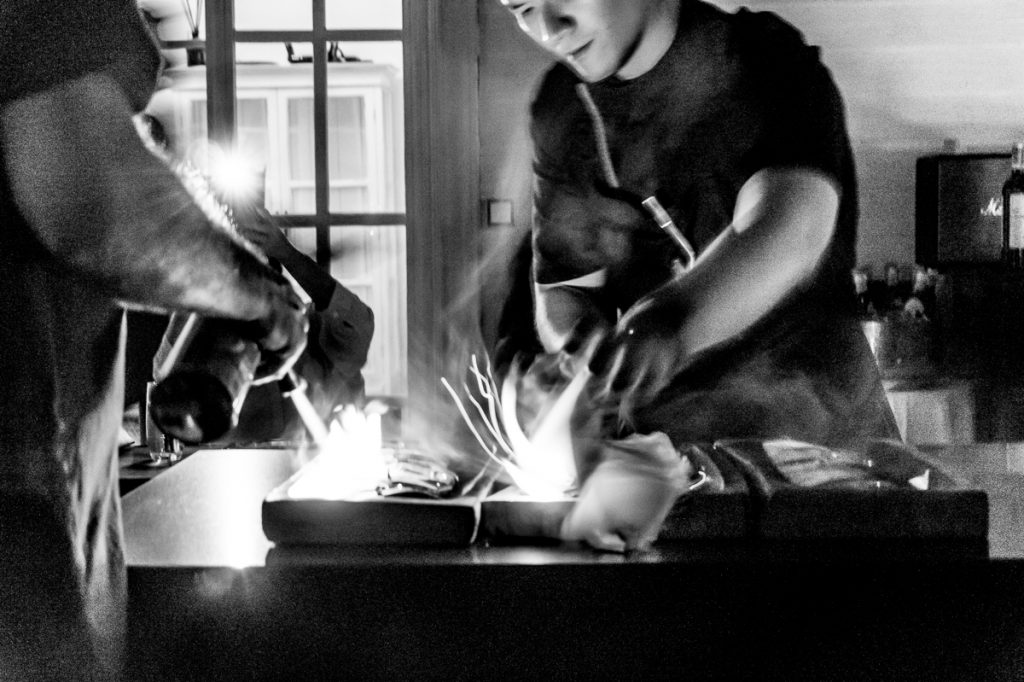 Some like it hot – Chefs playing with fish and fire

About the menu: Taste the Indian roots but don’t forget about other influencing cultures

If someone would ask me how the food was I would instantly answer, very special, very unique, a roller-coaster ride in my mouth, an explosion of so many different flavors and several things I had never tried before. This was the more abstract description of the ‘Gaggan Experience’ which, by the way, could also be called finger food at its best because for most of the dishes you actually didn’t need silverware.

It is actually also very difficult to highlight a certain dish because they all have been tasty, unique, good or even outstanding. One of Gaggan’s signature dishes is for sure the ‘Yoghurt Explosion’. Placed on a silver spoon, a fragile looking ‘sphere’ (thanks to the molecular kitchen) of specially spiced yoghurt (resembling a poached egg) waited to be dropped in your mouth in one bite. And believe me you will instantly wish that you could get more of those ‘poached eggs’. 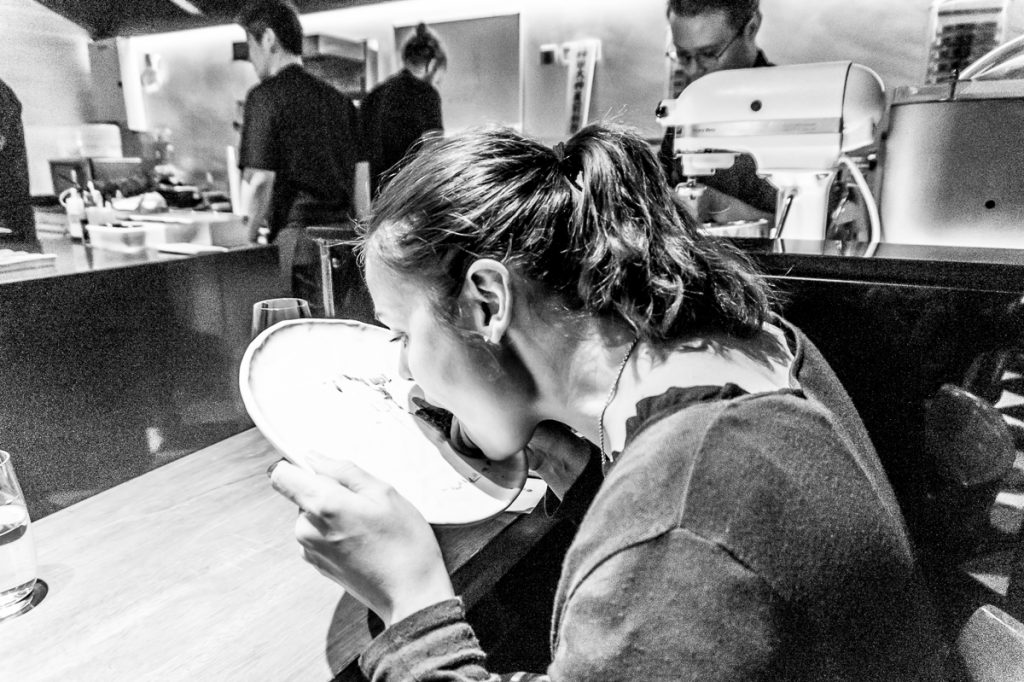 Lick it up baby, till the plate is clean!

The creativity and the unique tastes at Gaggan’s have no limits. Have you ever wished as child to lick your plate because the dish on it was so yummy? Unfortunately your mom told you that you are not allowed to do this because this is not proper behavior. At Gaggan’s this is quite the opposite. Here it is not only allowed it is actually encouraged with the dish ‘Lick it up Mushrooms Peas’. And believe me you’ve never seen a plate so clean. 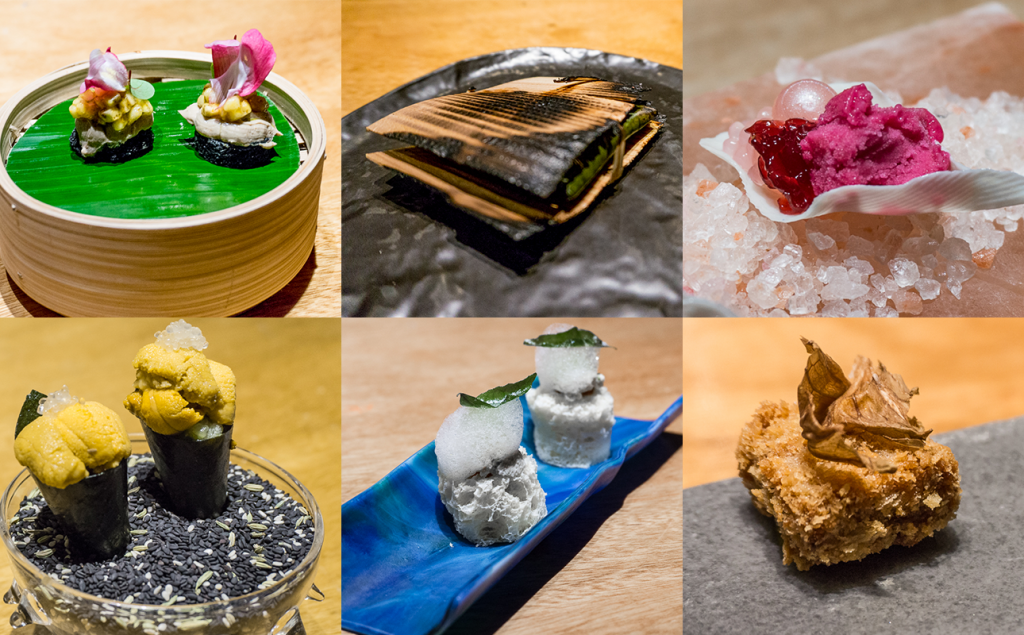 Examples of creativity in pure taste; six dishes out of 25

In general I loved the heavy fusion aspect of the dishes, from India (of course Gaggan’s roots) to Thailand (his current chosen place of residence) to Japan (maybe his next station in life) to wherever in the world. Therefore dishes like ‘Tom Yum Kung’, ‘Idly Sambhar’, ‘Fish Granola’, Chutoro Sushi’ ‘Green vegetable Matcha’, ‘Sheek Kebab Mango Chutney’, ‘Thai Green Curry’ ‘Seabass Bengali Mustard’ and ‘Charcoal Lotus Stem’ are not just only part of a tasting menu but important stations during a three hour journey of taste and entertainment.

The only course I struggled a bit with was the ‘Gin Tonic Uni’ but not due to a disappointing taste but rather the fact that cucumbers were added. I had a quick discussion with Annand and hoped that he would skip the cucumber in this G and T dish in the future. I’m still not sure whether my evangelization will work with a chef of his reputation but at least I’ve tried.

By the way the Gaggan interestingly changes its menu (at least parts of it) on a regular basis. You can imagine what kind of creativity is necessary to change a 25 course menu without losing the common theme and in parallel making sure that your taste sensors can handle it.

It turned out that this evening was not only a gustatory highlight but it also contained some very entertaining aspects where Gaggan shared some interesting insights in his life, his restaurant, of the world and of course of food. I liked the fact that he always interacted with his guests as well as his young kitchen team and let us participate in experiencing some of his favorite songs. My expectations have been fully met; yes I think they may have even been exceeded in many cases. The creativity in the combination of ingredients and the presentation of the dishes was unique, providing an overall extremely satisfying experience. Is it worth to spend around 5,900 Baht / 150 EUR / 175 $US (taxes and service charge already included) for a 25 course menu? I would definitely say yes if you consider all the effort in preparation, the quality of ingredients used and the way it was presented. In other words Gaggan was pricy but not overpriced, especially if you consider the fact that you spend over three hours in one of the best restaurants in the world being entertained by the chef himself. Would I go there again? Sure, I still have to convince Anand that a cucumber is still not the best ingredient you could put into your G and T. 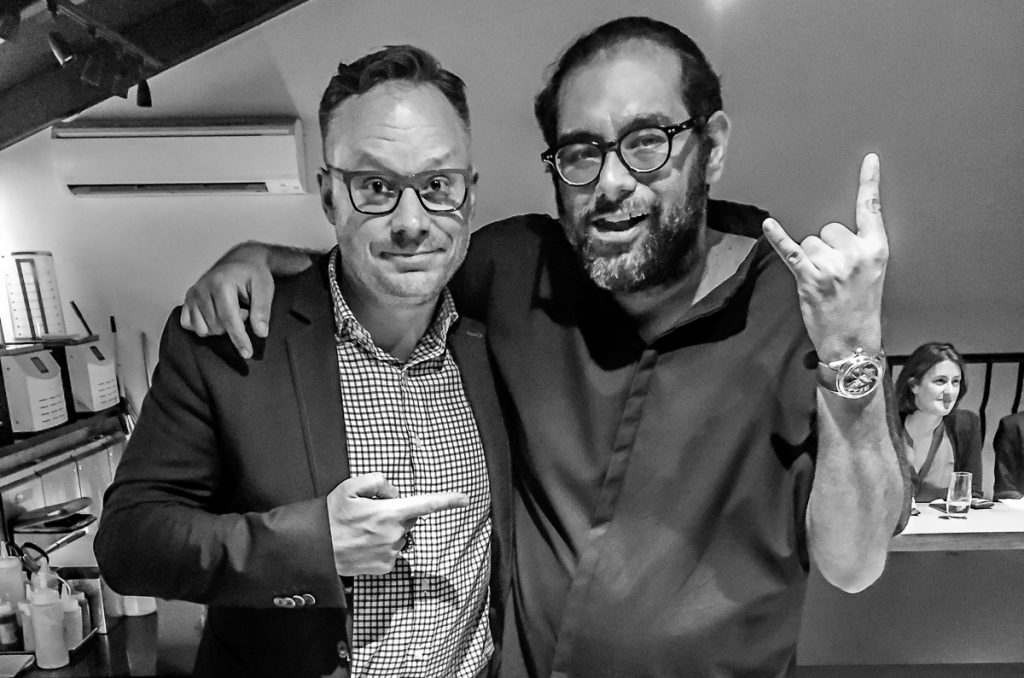 Doc Joe RG and the ‘Master of Rock Kitchen’

Location of the restaurant 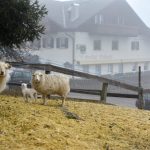 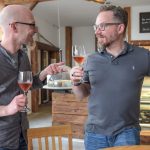 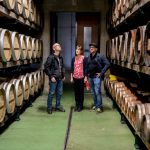 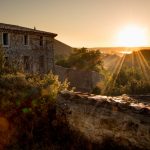